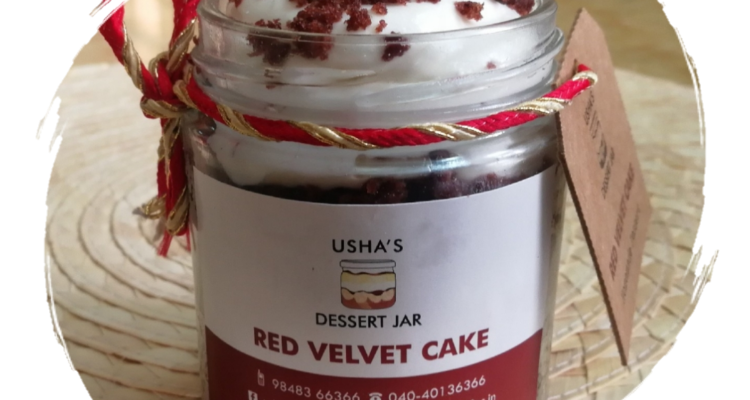 Red Velvet Cake Jar from USHA’s MUFFINS is a unique jar dessert made with unadulterated Red Velvet Cake and cream cheese frosting. This dessert doesn’t contain any added preservatives or colors. This Jars are made only on make to order.

A jar cake, (whatever you decision them!) square measure a genius thanks to get pleasure from your course. You layer the red velvet cake with the topping into cute mason jars. I baked mine as cupcakes in order that they were an ideal work. you only have to be compelled to cut them in 0.5 and layer along with your topping.

When foods were distributed throughout warfare II, bakers used cooked beet juices to boost the color of their cakes. Beets ar found in some red velvet cake recipes. Beets were and ar in some recipes used as a filler or to retain wetness.Adams Extract, a TX company, is attributable with transfer the red velvet cake to kitchens across America throughout the nice Depression era, by being one in every of the primary to sell red foodstuff and different flavor extracts with the utilization of location posters and tear-off formula cards.The cake and its original formula are standard within the us from big apple City’s known Waldorf-Astoria building, that has dubbed the confection Waldorf-Astoria cake.

However, it’s wide thought-about a Southern formula.Traditionally, red velvet cake is iced with a French-style butter inter mixture icing (also known as ermine icing), that is extremely lightweight and downy, however long to organize. cheese ice and buttercream ice ar variations that have exaggerated in quality.

In Canada, the cake was a well known course within the restaurants and bakeries of the Eaton’s emporium chain within the Nineteen Forties and Fifties. Promoted as associate exclusive Eaton’s formula, with workers World Health Organization knew the formula sworn to silence, several erroneously believed the cake was the invention of the emporium matriarch, Lady Eaton.

In recent years, red velvet cake and red velvet cupcakes became progressively widespread within the North American country and lots of European countries. A revitalization within the quality of this cake is attributed by some to the film Steel Magnolias (1989), including a red velvet groom’s cake created within the form of associate antedate. Magnolia workplace in Manhattan has served it since its gap in 1996, as did restaurants familiar for his or her Southern preparation like Amy Ruth’s in Harlem, that opened in 1998. In 2000,Cake Man Raven opened one in every of the primary bakeries dedicated to the cake in borough